Read the review HERE on his site as well as below… 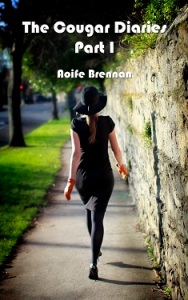 When The Cougar Diaries became the most popular book on www.FirstChapters.net, and stayed there for a record-breaking five days, I set aside a weekend to read the full text.

Although it appears to be erotica, it is in fact a beautifully written slice of life. The Cougar Diaries chronicles the adventures of a Dublin housewife who, five years after being deserted by her husband, decides to experiment with casual sex.

Her trysts, which are fewer than you might think; are described with a level of honesty and humour that renders them almost innocent. We quickly take the side of Aoife on her journey to discover the pleasures which were missing from her marriage. Along the way we learn about the difficulties of raising two teenage boys on your own, while holding down a demanding full-time job and narrowly avoiding redundancy. We also learn about the value of friendship: without the support of her brother and a few close friends, Aoife would soon have been on anti-depressants.

I looked up the name Aoife (it’s pronounced ee + fa and the English equivalent is Eva or Ava). It means beautiful, radiant or joyful. Known as the greatest woman warrior in the world, Aoife was the mother of Cuchulainn’s (read the legend) only son, Connlach. Aoife Dearg (“Red Aoife”) was a daughter of a king of Connacht who had her marriage arranged by St. Patrick himself.

This chimes with the protagonist and narrator, Aoife Brennan. We know she’s beautiful because many men are attracted to her (although she never tells us that herself), and there is something brave and almost warrior-like about the campaign she wages to rediscover sex in her early forties.

This is an intelligent, carefully crafted book which tells us how the human spirit can overcome rejection and despair. Only the Mother Grundys among us will object to the graphic, but honest descriptions of sex. This novel is entertaining, poetic and honest. I look forward to part two.

One thought on “5*STAR review by David Conway /FirstChapters.net”

I love my kids, I just hate parenting

The blog of a professional Sass Queen

So The Story Goes
Penelope Jones

Little bit of Nice and a Whole lot of Naughty!

Thoughts of a woman, random.

The latest news on WordPress.com and the WordPress community.